Many years after the widespread adoption of military simulation, defence forces worldwide are still grappling with a “terrain problem.” They have myriad terrain formats for myriad runtimes. GIS specialists are needed to help prepare data from ever-expanding sources to generate new digital terrains. And, the terrain creation process continues to be time consuming and confined to specialist terrain builders. 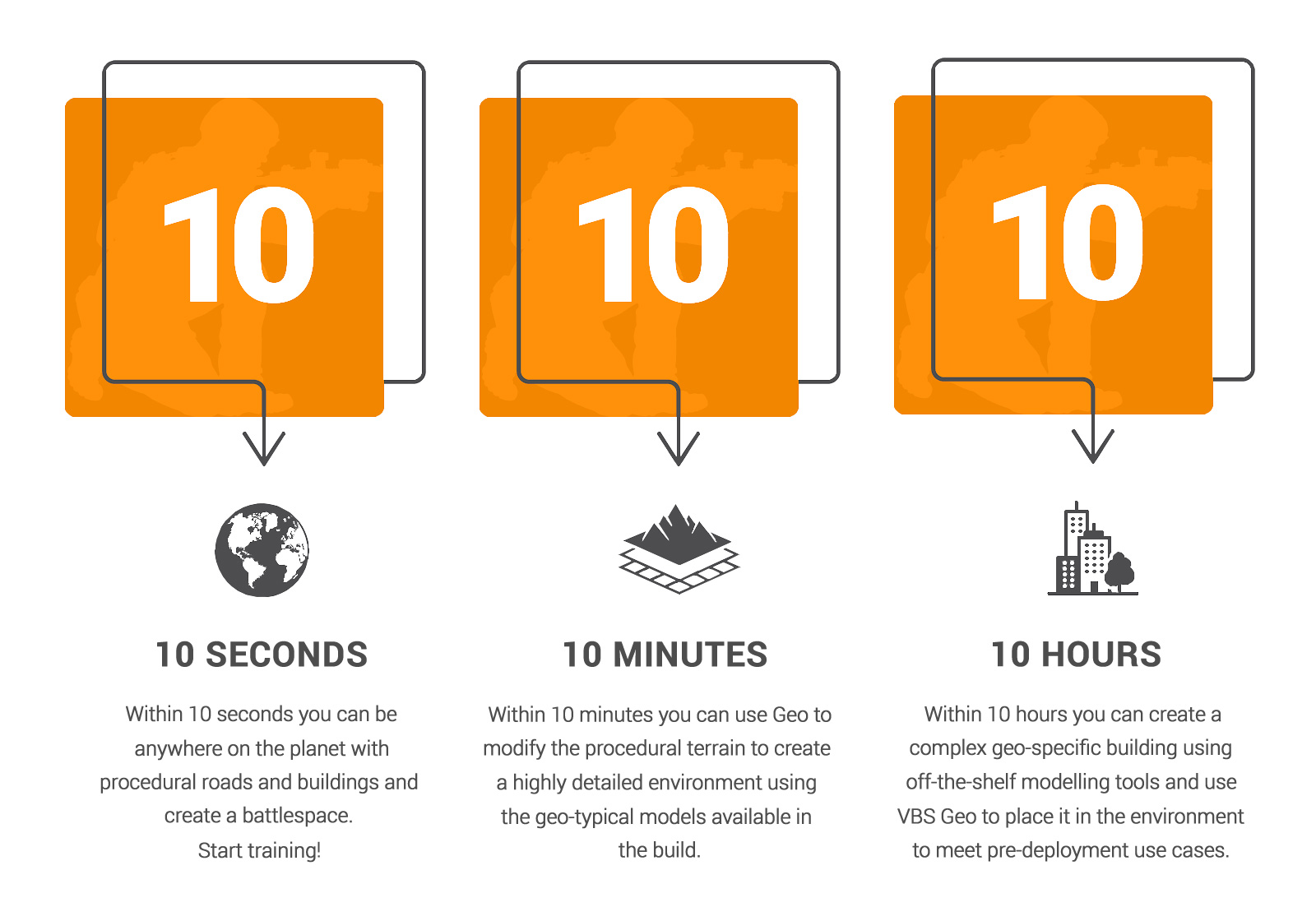 VBS4 is a powerful solution to help address many of these challenges. VBS Geo is a VBS4 terrain editing mode that empowers non-technical users with the ability to intuitively and rapidly modify, extend and replace environmental features of the 3D world baseline without leaving the VBS4 application and without needing special terrain-building expertise. All terrain edits can be made with just keyboard and mouse skills using intuitive interfaces.

“We’re making terrain editing easier to do, so it can be done by people who aren’t trained with GIS specialist skills, which means you can have more people building terrains, scaling your resources, and it enables people who have knowledge of a location build it the way they know it to be,” said Earl Laamanen, TerraSim’s Technical Director. “For instance, if someone has come back from deployment and they know a base is built a certain way, they can create it instead of translating that to a specialist terrain construction team. They can jump into VBS Geo and, with limited familiarization training, build out the base themselves.”

With VBS Geo, users can quickly move a road, or add a building or a fence, and VBS4 will do the rest. The VBS4 AI entities will follow the road, stop at pedestrian crossings and avoid any new buildings or barriers, etc. All terrain features added from buildings and fences to berms and ditches will become appropriate obstacles for any moving entities with realistic physics-based collision, and dynamic alteration of the terrain.

VBS Geo enables both small-scale edits (e.g., creating a trenchline for a defensive position) to large-scale city-building (e.g., importing vector data describing roads and buildings for an entire city). By comparison, the VBS3 terrain editing tool (Visitor4) and most other terrain building tools are complex to use and require extensive training to use effectively. Terrain editing in VBS Geo is at least 10x faster than VBS3’s Visitor4 and unlocks the power of VBS4 terrain building for non-engineers.

Build your terrain database in 6 quick and easy steps.

With VBS Geo, you can jump right into direct editing VBS4’s 3D world baseline. If connected to the VBS World Server, you can also import high-resolution orthoimagery and GIS shapefiles via VBS Geo to enhance the 3D world baseline. Extruded 3D buildings are created from 2D shape files — terrain based on imagery and procedural trees and vegetation blend seamlessly. After users import their data, they can continue to use VBS Geo to make additional edits to the terrain. All edits are saved to a Battlespace and can be easily shared to another Battlespace to allow you to create different missions or plans with the same edited terrain. 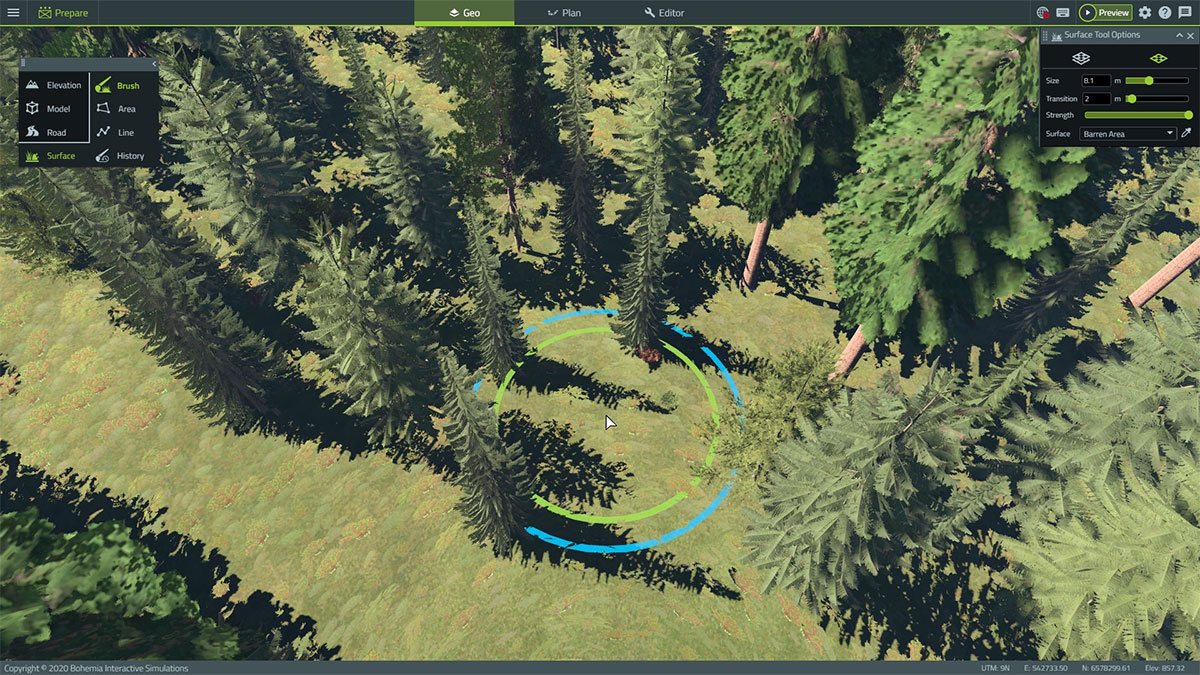 Choose from over 3 dozen surface types to customize your terrain.

Build berms, dig trenches, and more. With VBS Geo’s Elevation Tool, users have the option of a brush or area selection to raise, lower, smooth or flatten terrain along with any objects sitting on the terrain. Much more useful than a simple revert feature, Geo’s history brush allows spot-fixing areas by reverting areas to their original state even if the area was edited much earlier in the editing process. 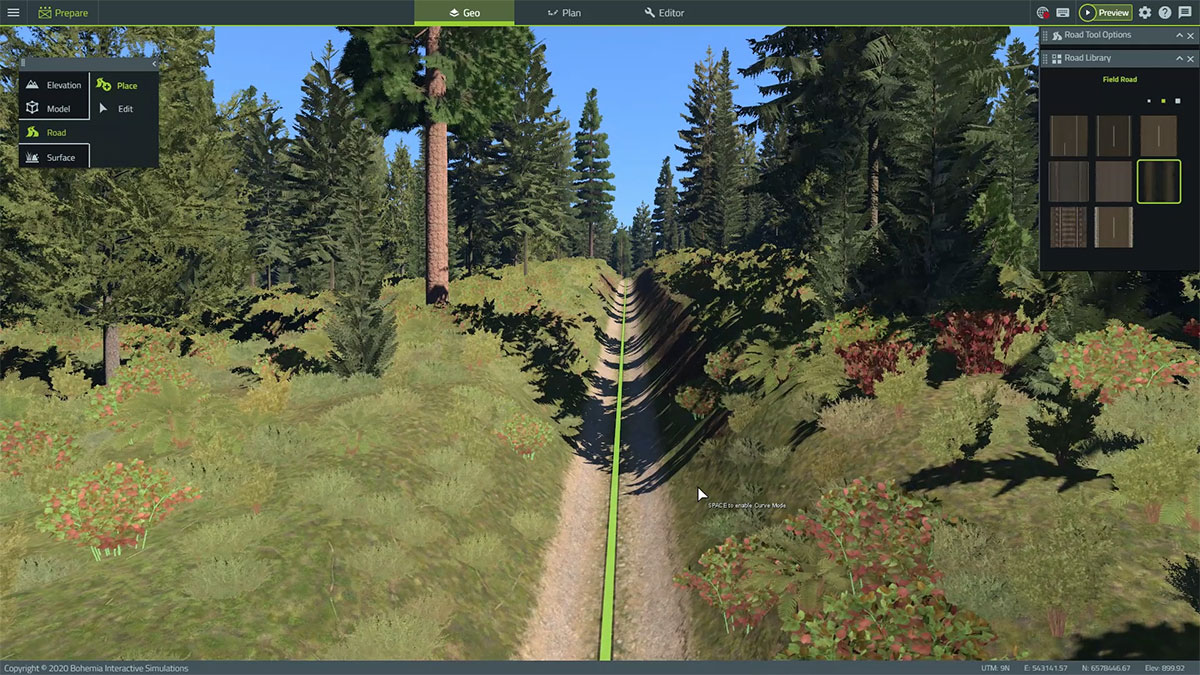 The Road Tool in VBS Geo gives you a set of simple options to add and change roads in VBS4. As roads are added or edited, they can automatically cut into the terrain if desired. VBS Geo also allows control over the road appearance with just a few mouse clicks and a simple road curve mode lets you trace natural road shapes. When creating roads that cross each other, VBS Geo’s Road tool automatically creates the correct junctions so AI entities can use them. 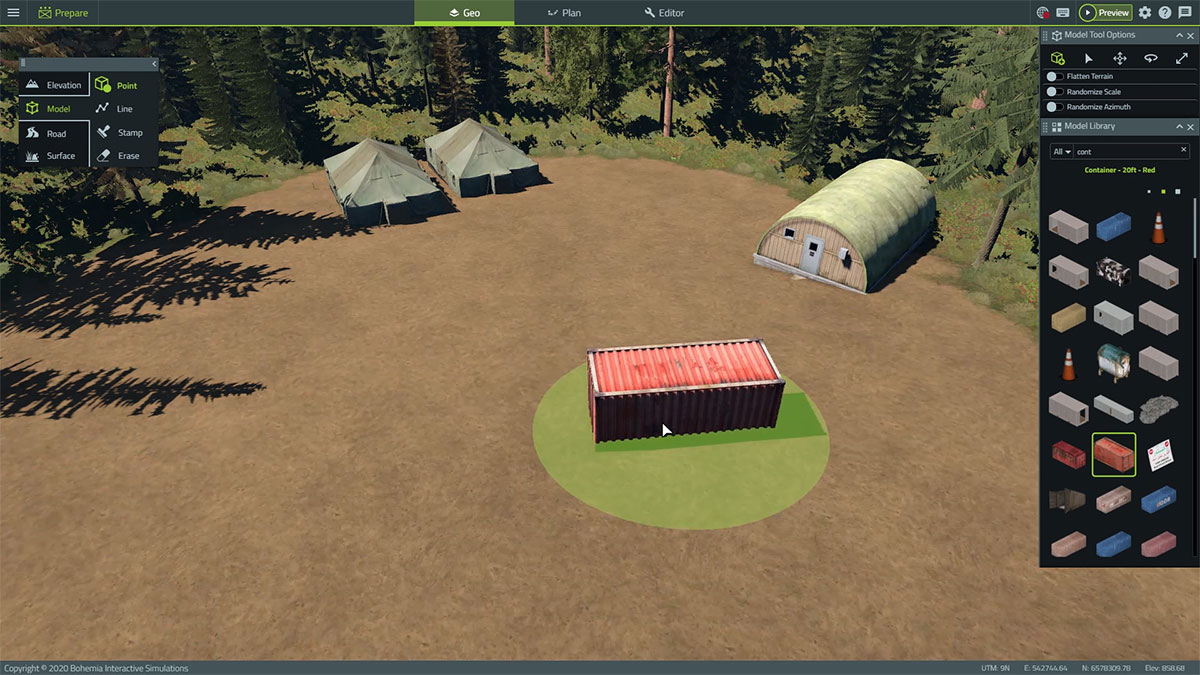 Enhance the Environment with Thousands of 3D Objects

From houses to tents to street lights and much much more, VBS4 includes thousands of 3D environmental and cultural objects to populate the terrain for greater realism. Simply select an object from the VBS4 library and point and click to add new objects to the terrain in VBS Geo. Rotate and scale models easily to produce quick realistic placement of natural object models, such as stones and bushes. Use the Model Line Tool to place objects in series like walls, streetlamps and fences. Custom linear model styles can be developed to allow for an endless variety of new linear model placement combinations.

VBS Geo will be further enhanced in future VBS4 releases to add additional modeling capability including expanding surface types and other content, allowing users to add their own custom procedural content and improved editing tools for civil infrastructure such as airports, bridges, ports, etc.

For more information about the VBS4 and VBS Geo development roadmaps, contact BISim at sales@bisimulations.com to learn more.