There’s little doubt that unmanned systems are proven in the air! Now armies are looking to catch up with use of Unmanned Ground Vehicles (UGVs), but their use on the battlefield brings huge levels of complexity.

Military UGVs will be autonomous. Thinking of autonomy, Toyota’s President and CEO, Akio Toyoda explained that “we believe chauffeur mode, or total autonomy, will only be 100% accident free by testing a minimum of 14.2 billion kilometers, which in practical terms, would take decades of real-world driving. Therefore, the only way to accomplish this goal safely, and in a timely manner, is through the use of multi-agent computer simulation which we have developed.”

Military UGVs will be far more complex than “chauffer-mode” self-driving cars. There will be many complex military problems to solve in areas such as off-road path-planning and obstacle avoidance, as well as operating in a war environment and dealing with electronic warfare, GPS-jamming and enemy fire. Nonetheless, multi-agent computer simulation for such use cases is already here with BISim’s VBS4 virtual simulation!

As well as military training, military organizations are now using VBS4 as a tactically complex, high-fidelity multi-agent simulation to test out UGV concepts. VBS4 provides the digital sandbox to experiment, to test ideas and hypotheses. 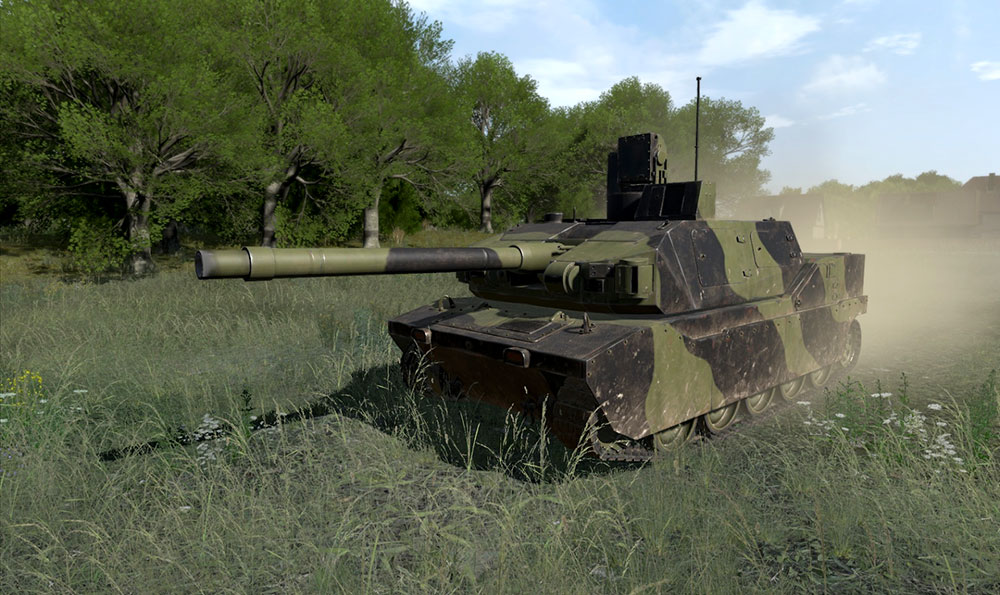 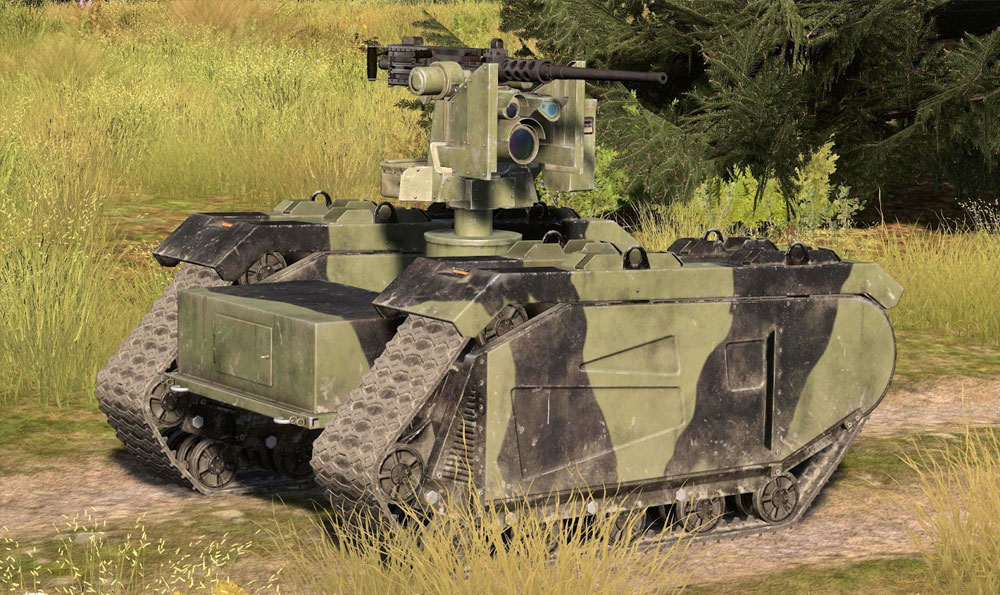 There’s so much you can try in the VBS4 sandbox before you ever ‘cut metal’ and field a UGV system: person-in-the-loop, rules-of engagement, command and control, man-machine interfaces, design trade-offs, force-mix, logistics, doctrine and tactics, techniques and procedures (TTPs) changes – the list is long.

Few, if any, of the military UGVs that will be deployed in the battlefields in ~2035 and beyond even exist today. Armies can use the powerful VBS4 virtual environment to test concepts with autonomous tanks and other UGVs that represent the kinds of capabilities in the virtual world that don’t yet exist in the real world. Armies can test out different designs and capabilities in a realistic virtual battlefield to see what works and what doesn’t, thinking through many kinds of design, doctrine or integration decisions. If VBS4 doesn’t have the UGV platform or capability you need, you can build and configure a new one or ask BISim to do this

For example, in a virtual battlefield against a virtual version of an near-peer enemy (who could also be equipped with UGVs), you can test what would be the optimal sizes, armour and armament for future autonomous vehicles, and what are the trade-offs of range and logistics for different propulsions systems. In VBS4, BISim built models of the different types of autonomous vehicles and the human-to-machine command and control systems for our customers to enable them to do these experiments and consider their future force structure. 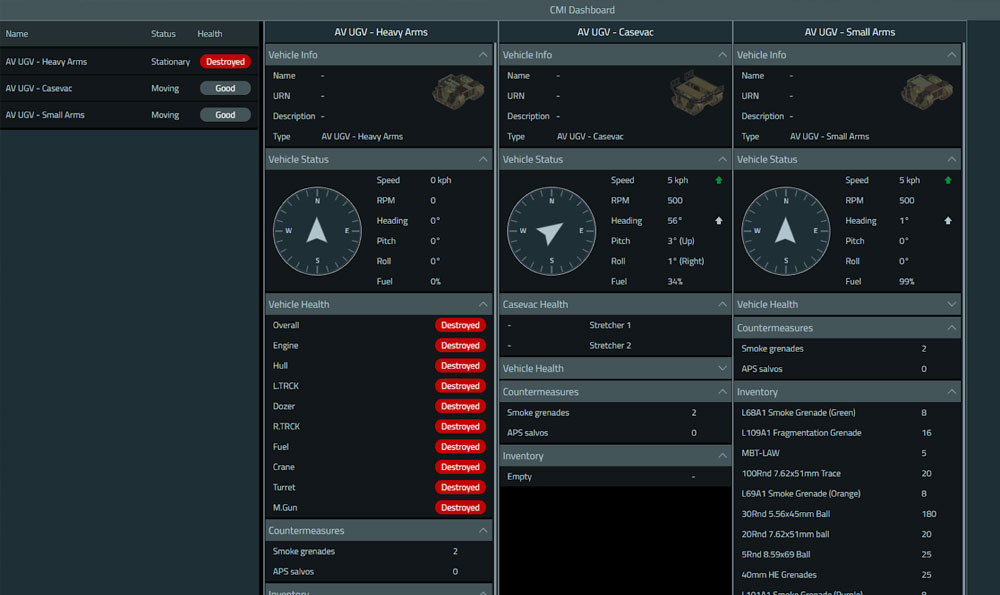 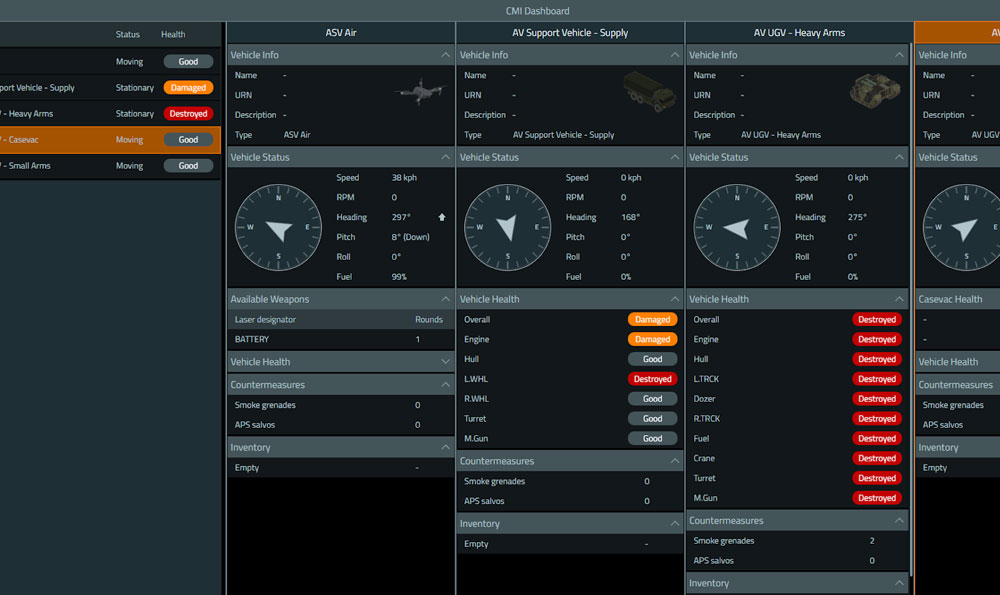 It's not just tanks!

It’s not just tanks, “an army marches on its stomach’ and logistics are just as important. In logistics, there are (at least) two types of operations that could, in a matter of years, make use of autonomous vehicles, ‘Leader-Follower’ and ‘Last Mile Resupply’. ‘Leader-Follower’ is the concept of large supply columns moving equipment and personnel to the front line. Such operations could take people out of harm’s way if logistics vehicles were to be driven completely autonomously, and more soldiers could be allocated to weapon systems. ‘Last Mile Resupply’ is the concept of embedding smaller autonomous vehicles into fighting units that are operating on/near the front line to carry additional equipment/supplies. This provides a faster and more reliable resupply of more armaments and enables more rapid casualty evacuation. VBS4 can be used to trial combinations of different logistics types and quantities of UGVs needed, as well as the mix of UGVs and crewed vehicles.

Militaries can also use the VBS4 virtual environment to test the most effective ways of ensuring there’s a human “in the loop” for future UGV operations. Human-in-the-loop and decision-making training will be crucial for UGV command and control and operational training. You’ll likely want to only use virtual simulation for such training as deliberately having rogue or uncommunicative UGVs driving across your physical training areas could be a very difficult safety case to get approved.

There’s no doubt that military experimentation and investment in UGVs will continue to increase, with the aim of fielding fleets of autonomous military vehicles. Military UGVs will bring enormous complexities compared to self-driving road vehicles, but some of those complexities are already being investigated by armies today using VBS4. VBS4’s virtual simulation is a powerful sandbox for experimentation and concept development, and numerous military UGVs are available “out-of-the-box” in the VBS4 model library, together with their command-and-control interfaces.

If you’d like a demonstration, or to know more, you just need to contact sales@bisimulations.com, and we’d love to show you more.To get the latest company updates and news right to your inbox, sign up for BISim's Newsletter.