In 1794, the French Aerostatic Corps launched l’Entreprenant, a manned, tethered reconnaissance balloon high above the mass of troops gathering near the Belgian city of Charleroi. During the Battle of Fleurus, l’Entreprenant’s two-man crew of a captain and division commander stayed aloft for nine hours monitoring manoeuvers of 150,000 combatants below. (Nowadays, this would be called ‘persistent ISTAR’.) The crew reported their reconnaissance with dropped messages and visual signals.

For the next 100 years, many artists reimagined the mass cavalry battle, featuring l’Entreprenant as a fixture in their works of art. Yet contemporary accounts differed on the usefulness of this first use of military aviation. The impracticality of gathering forces on such a scale for training meant that reconnaissance practice would have been on the job. Perhaps with greater training for the 26-strong Aerostatic Corps (more romantically, ‘la compagnie d'aérostiers’), there would have been more universal recognition of their military effectiveness.

Today, intelligence/surveillance/reconnaissance (ISR) is the main use for one of the fastest growing areas of military aviation, the use of unmanned aerial systems (UAS) or ‘drones.’ Yet even today, realistic reconnaissance training can’t be done just by flying a drone anywhere you please. For one thing, access to civil airspace is tightly controlled for safety reasons. Cost is another factor: an hour of flight time can run into the thousands of pounds for larger UAS platforms.

With today’s virtual simulation technology, though, reconnaissance training for military analysts and intelligence staff needn’t have any of the limitations of scale, complexity, location or timing, that constrained ‘les aérostiers’. 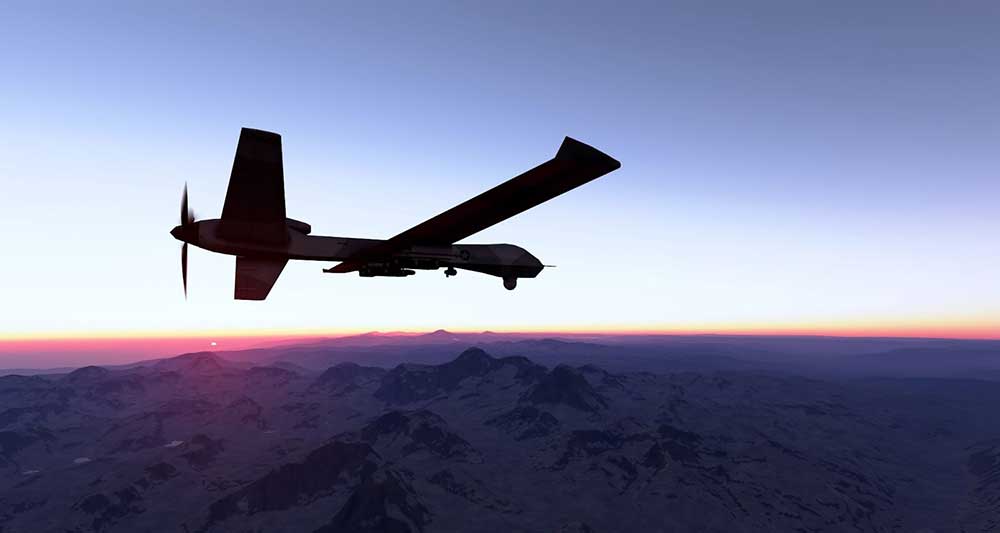 An MQ9 on dawn patrol in the VBS4 whole-earth environment.

A UAS ‘platform’ delivers imagery output to an army’s J2/G2 cell. J2/G2 cells are responsible for providing decision support to commanders including targeting, tracking, and analysing potential enemy courses of action (COAs). Image analysts need to train their skills in the different sensor views available to them in a range of environmental conditions and tactical scenarios. Intelligence operators need to absorb the information that UASs feed and develop this into intelligence to present to the commander and learn how to work with the image analysts in timeframes and conditions that mirror operational conditions.

For effective Intelligence Surveillance and Target Acquisition Reconnaissance (ISTAR) training, you’ll need a virtual environment that can do the following:

Below, we highlight three key UAS training cases that VBS4 can be used for ‘out of the box’ to help intelligence operators, image analysts and sensor operators prepare for a variety of real-world situations.

A core competency of an intelligence operator is recognising both enemy and friendly equipment on the battlefield. Not only are accurate identifications of equipment important for commanders to authorise targeting fires from UAVs or other platforms, but it offers insights into the nature of the enemy forces and the threat they pose. It’s vital for an intelligence operator to quickly discern between a T-72, T-80, or T-90 from a UAS feed, and this is complicated further where potential adversaries are using the same equipment in many situations. Aspects and other details such as symbols need to be clearly identified. 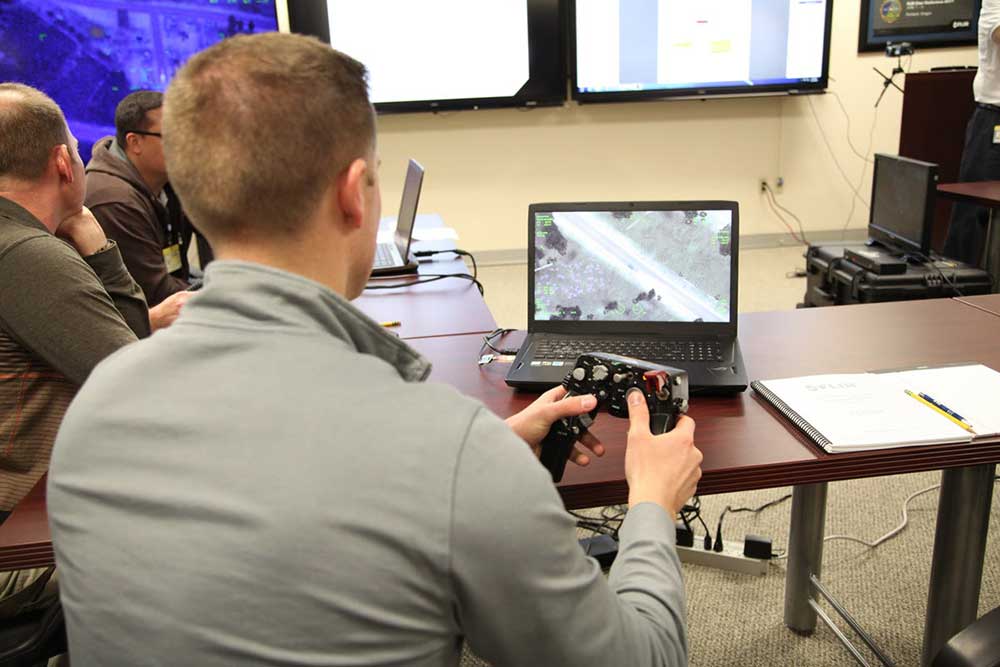 MAG Aerospace’s engineers developed a plugin for VBS that connects the FLIR SAFIRE hand control unit for use in VBS. Image Courtesy of MAG Aerospace.

VBS4 offers trainees the opportunity to practice their ISR sensor feed recognition skills in ways not possible in purely live training, where enemy platforms are highly unlikely to be available and even friendly ones extremely hard to make available for a live exercise. Also, with over 18,000 3D models available, VBS4 offers vast amounts of different equipment required to meet a wide array of potential allied and enemy forces. With AAA-gaming quality graphics, VBS4 processes the level of detail and resolution that recognition training requires. Recognition is often based on the smallest details on a vehicle and a powerful rendering tool with high-quality models is necessary for accurate training that represents the real operating environment.

For MAG Aerospace, developers of FLIRSIM™ and a BISim customer, VBS4 offers a robust model library to create living cities anywhere in the virtual world for showing operators how to use the camera in real-life situations.

“VBS4 has many different features we leverage. For example, we use the real-time mission editor extensively,” says Wes Fine, MAG Aerospace Product Manager. “I have the flexibility to take control of a vehicle in a training scenario instead of having a pre-scripted event. I can drive through a town and challenge students or I can roleplay as a subject getting out of a vehicle that they have to follow.”

The VBS4 scenario settings also make life a lot easier because we can quickly change from day to night and use the weather settings to introduce operators to different challenges. 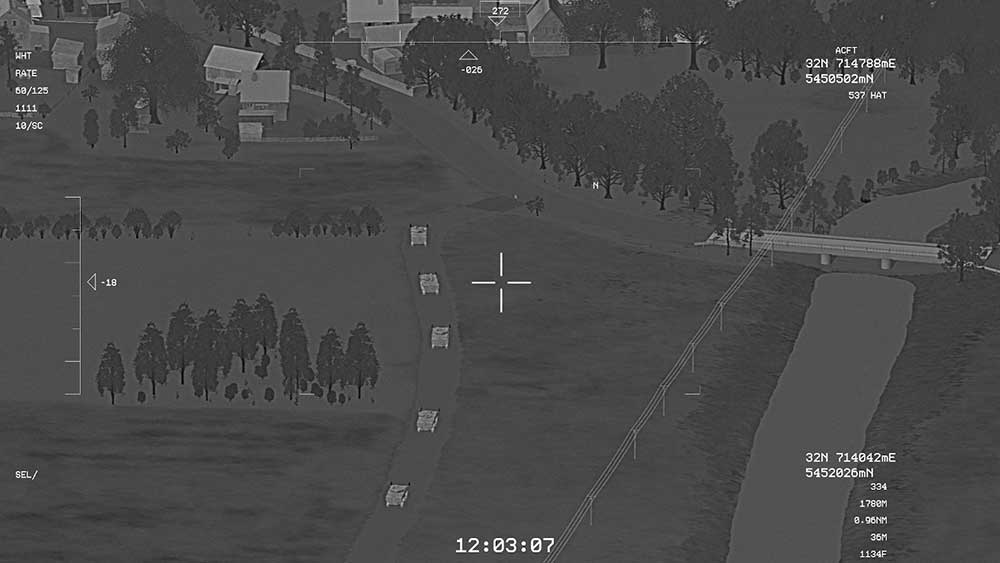 In addition to simple recognition, intelligence operators must learn to observe the environment through different sensor viewpoints, such as night vision and thermal. Different sensor signatures need to be observed based on the UAS feed available or that’s most appropriate for the task, such as recognising the heat signatures of infantry moving into a defensive position or the lack of heat from a vehicle, suggesting that it hasn’t been moved or been active for a long time. VBS4 includes not only these sensor viewpoints but also a representative thermal model for all content that allows for intelligence operators to train their observation and deduction skills in a way not easily coordinated with live training.

For an intelligence operator all of their observations are merely unprocessed information until they start to consider the “so what” ― bringing together the information, processing it, and making useful deductions for the commander. Course-of-Action analysis is a major result of this work, using platforms such as ISR sensor feeds to help piece together the most likely and most dangerous courses of action that the enemy may take next. A key method is observing enemy movements, actions, and equipment through a UAS feed to help inform the conclusion. For example, certain equipment may only be seen in certain enemy formations (e.g., use of bridge layers suggests an advance over a river may be planned), and artillery aiming in a certain direction may indicate potential attack targets. 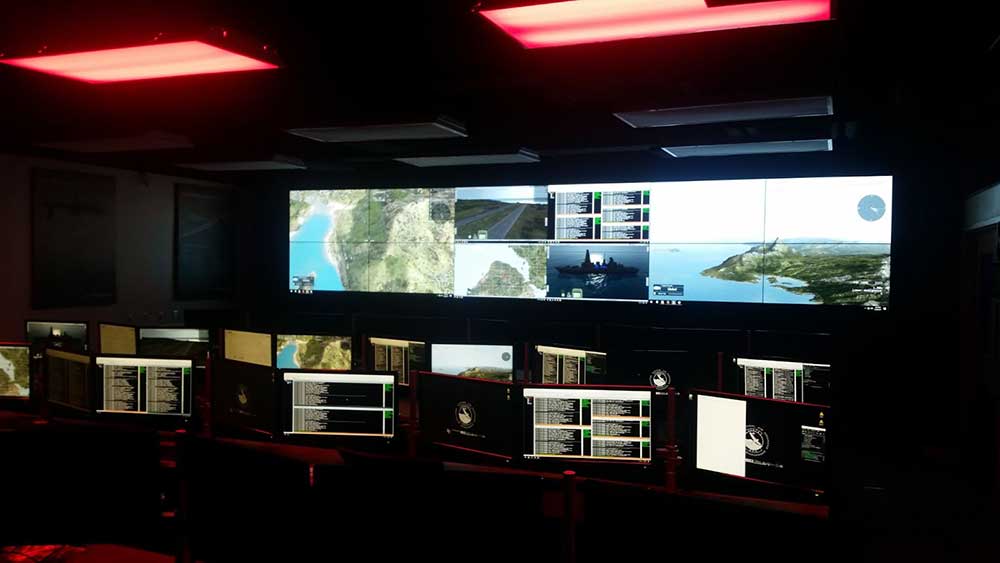 Developing scenarios to this level of detail in live training is nearly impossible, with the sheer numbers of equipment, manpower, and time to set up even simple actions. By using VBS4, not only can these situations be simulated, but they can be done so quickly, easily, and in a repeatable manner using VBS Control AI and VBS4’s VBS Plan mission planning mode. Scenario designers can lay out the scheme of manoeuvre in VBS Plan that they wish the enemy forces to take and allow VBS4 to run through this, scheduling everything to a timeline and ensuring that actions occur when needed. With VBS Control AI managing these actions, it’s easy to achieve large and complex scenarios for trainees to observe from their UAS payload sensor feeds. This gives the rich level of information needed for an intelligence operator to train their skills in picking out what’s important, analysing its meaning, finding the “so what”, and presenting this as they would if it had been a real UAV in a real situation.

With VBS4, whenever units and commanders need to train, they can do so with the quality of reconnaissance and intelligence input they would have in actual operations. What gives VBS4 virtual simulation a huge edge over techniques such as reusing actual drone footage over and over again, is that the intelligence output can be compared to the tactical scenarios that were used in the VBS4 simulation. In other words, did what was reported match what the tactical scenario was doing, which would be a ‘known known’ as the scenarios are scripted by the training designer. VBS4 has tools to make complex scenario generation incredibly rapid and easy to do. And virtually any type of scenario can be created, keeping training both relevant to the threat, interactive, and graduated according to skill levels.

VBS4’s powerful and flexible AI is important here. VBS4 AI allows highly realistic behaviour by individuals (in and out of uniform), units and groups/crowds, and vehicles (individually or in convoy). Importantly for training, VBS4’s advanced AI is ‘deterministic’, meaning an ‘entity’ will behave the same way each time under the same conditions.

UAS and Apache in VBS4 work together for manned/unmanned team operations.

Another key feature of VBS4 is the VBS World Server, which stores and serves geospatial data for the entire planet via your local network or remote server. This enables you to train for operations anywhere in the world within seconds. That’s useful because intelligence, situational awareness and air mobility are fundamental roles of military airpower. In other words, you need to be able to get reconnaissance information from anywhere in the world very quickly. Through its world server, VBS4 delivers this.

Of course, UAV reconnaissance is not just a visual spectrum activity, though military drones do have incredibly powerful optical cameras. Infrared technology is common for detecting heat signatures, and the largest drones are capable of radar imagery. That means your virtual simulation needs to accurately display complex thermal properties (depending on the ‘material’ of an object) including modelling how heat signatures vary (e.g., relative temperature, engine hotspots) and have realistic thermal ‘shadows’. Using the VBS Simulation SDK, VBS4 customers can tailor sensors to their own settings.

With VBS4 as your simulation tool for UAS training, you can accelerate the training of sensor operators as well as intelligence and image analysts by enabling open-ended, dynamic training sessions while saving the wear-and-tear on actual equipment and preparing for operations anywhere in the world you need to deploy.

So, UAS operators, image and intelligence analysts, there’s an enormous amount that VBS4 can do to train you and your colleagues for your unique and varied situations, to very high degrees of authenticity - and anywhere in the world in any conditions. VBS4 virtual simulation technology eliminates repetitive video training and the constraints on ORBATs, tactical scenarios, scale and geography. Now, what would 1794’s ‘les aérostiers’ have made of that?

You can learn more about how BISim military and commercial customers are using VBS for UAS training by visiting bisimulations.com/company/customer-showcase.

At BISim, we would be more than happy to talk to you about your UAS training needs and discuss how best we can aid in your training delivery. Please ping us an email at sales@bisimulations.com to find out more.