The days of a tank just being a tank are long gone.

Today you have to train in this “high-tech machine on tracks” to be proficient in your role, to be an ace crew, and to be able to work seamlessly as a tank troop or mechanised infantry platoon. It’s complex and takes time. For a soldier, what would have been a 4-week basic course 30 years ago can now take three times as long.

“I don’t know about you, but if I neglect to do something for a while I get rusty. I’m not at my peak,” says Craig Turner, a BISim business developer and former instructor at the British Army’s ARMCEN. “So for our high-tech AFV crews, what about their skills fade?”

“With budget restrictions on ‘track miles’, training area scheduling, time spent maintaining the vehicles, and the ‘same old, same old’ training scenarios (constrained by where you can go, where you can fire, and the realism of ‘friend’ and ‘foe’ on your ‘battlefield’), there’s only so much you experience that you can pick up in the limited time you’re in-vehicle,” Craig explains.

Want a deep dive into our approach to AFV training and simulation? Send an email to sales@bisimulations.com to request a copy of BISim’s white paper “A COTS Approach to AFV Training.”

Craig points out that one way armies have dealt with this training challenge is to use custom-built, full-fidelity AFV simulators (‘sims’) that physically reproduce everything as closely as possible about the actual vehicle: high-fidelity emulation of panels, switches and displays, etc. Often, these are built with custom hardware and software, so they can be expensive to produce and maintain, and they’re difficult to upgrade and limited in number. So you’re stuck with what you bought. It’s a massive undertaking to improve, update, or change them, and it’s getting ever harder to keep such simulators operational. (When the “it’s new” smell has worn off, not great!) 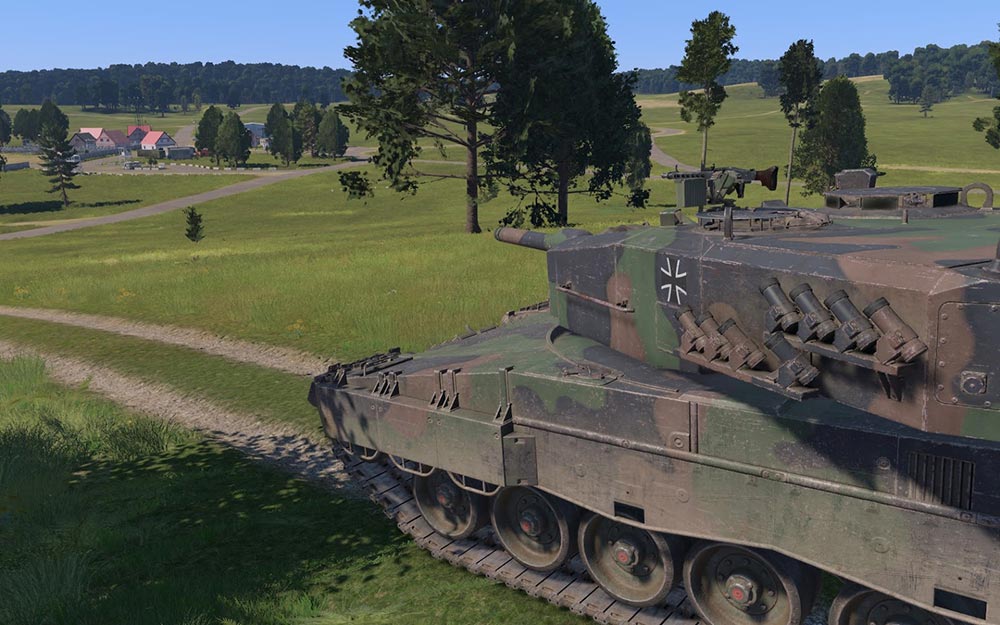 A Leopard tank in VBS4: Run up unlimited virtual track miles in VBS4.

So aiming to increase “training reps,” better prepare for your live training, and, ultimately, your operations, armies are looking for alternatives and complements to the traditional-style AFV sims. Many armies are turning toward high-fidelity, low-cost and flexible “COTS” (Commercial-Off-The-Shelf) solutions that use a targeted fidelity approach to meeting key factors needed to achieve effective learning and allow complex, tactical continuation training.

What is Targeted Fidelity?

The fidelity of simulators can be separated into distinct elements including physical, simulated, task and psychological fidelity. Physical, simulated and task fidelity can be thought of as ‘inputs’ to a solution - they define what is actually delivered in terms of hardware and software capability, how closely the experience in the simulator is to the actual vehicle. Psychological fidelity can be thought of as an ‘output’ of the solution - did the trainee’s thought processes and judgement closely replicate a real-world operation in actual equipment?

“Simulators allow you to get familiar with a vehicle’s complex systems before you get in them for real,” says William Day, BISim’s Head of Technical Sales Support. “You build confidence, competence, muscle memory and train in scenarios that are not possible in the real world.”

William notes that modern AFVs are hugely complex, and in many ways share levels of sophistication close to aircraft. But he points out that ultra realistic training systems that recreate every switch and button of the real vehicle are not always the best solution to maximise training benefit. There are alternative simulator training system designs which maximise availability and cost without reducing the learning or training credibility, he explains.

“High levels of physical fidelity do not necessarily produce better learning or transfer of training.”

For trainee AFV crews, targeted fidelity is achieved by first defining what Key Learning Points (KLPs) for tactics, techniques and procedures are required and then via a Training Needs Analysis (TNA) or trials and/or concept demonstrators to specify physical, simulated, tasks and psychological fidelity needed to achieve effective learning and create defined Training Objectives (TOs).

“All aspects of the solution design - a set of ‘training devices’/courseware/etc. - should focus on delivering a solution which imparts learning,” William says. “Any detail not needed should be removed.”

Targeted fidelity, therefore, fits very nicely into a Systems Approach to Training (SAT) process. So, ‘high fidelity’ is only needed if it improves learning outcomes at a reasonable cost. By the way, if there are certain training objectives that can best be achieved easily and cost effectively in the actual AFV, then there is no reason to include them within the targeted fidelity training device.

You have two guesses: which of the sketches below is the traditional, high-fidelity AFV simulator and which is the targeted fidelity sim?

If you’ve gotten this far, I know you got it in one guess. You might say, “But this looks like stuff I could buy in a good electronics store or online.” That’s right, it's the “COTS” word I used before. So if it breaks, it’s quick to fix, it’s relatively easy to update, and you can add more to it without becoming a major defence procurement programme. (Hey, don’t feel guilty about that! Someone still has to keep all this working and up to speed, but it’s certainly easier.)

The software is not the kind you generally buy online, but Bohemia Interactive Simulations’ (BISim’s) Virtual Battlespace 4 (VBS4) is COTS too. VBS4 is a highly capable COTS software platform: out of the box, it provides a powerful simulation engine, whole-earth rendering, terrain building capabilities, a massive model library, ballistic and sensor simulation, after action review and support for many different HMDs. This means you just need to get some of your AFV’s specialized systems built in the software (let’s say your multifunction panels and fire control system, or whatever your targeted fidelity needs), install and start training. 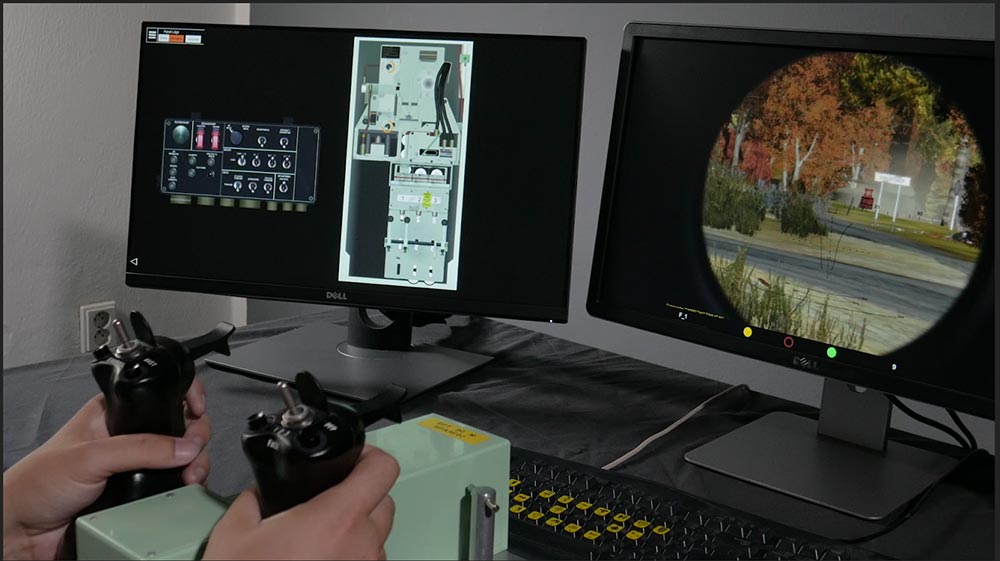 A high-fidelity emulated controller in use for desktop VBS-based training.

So, with VBS4’s tactical mission editor you are empowered to take control of your own training, limited only by your needs and imagination.

None of this is to say, of course, that you don’t need any traditional AFV sims (like the one on the left in the image above, in case you still had that tiny piece of doubt). In your overall training solution, these could have their place. Since the price of one traditional AFV sim would buy you a lot of targeted fidelity simulators, your training throughput is higher and — assuming you install the simulators where they’re most needed — a lot of continuation training can happen, avoiding dreaded skills fade and keeping your crews at their peak.

A bit more about targeted fidelity simulators: Depending on the fidelity required, the solution could be as simple as a PC loaded with COTS software and using an off-the-shelf joystick. Or, it could be as complicated as a networked set of PCs with multiple stations for crew positions, a sophisticated external physics model, and custom controllers closely replicating the real controls, with all stations mounted on motion platforms. And, at the complex end of the spectrum, there is little difference between a COTS-based solution and a custom-built traditional simulator (other than the COTS-based solution will likely be a lot less expensive). Many armies like crews to use high-fidelity emulated hand controllers (i.e. replicas of the hand controllers in the AFVs) so that muscle memory and ‘switchology’ is developed. 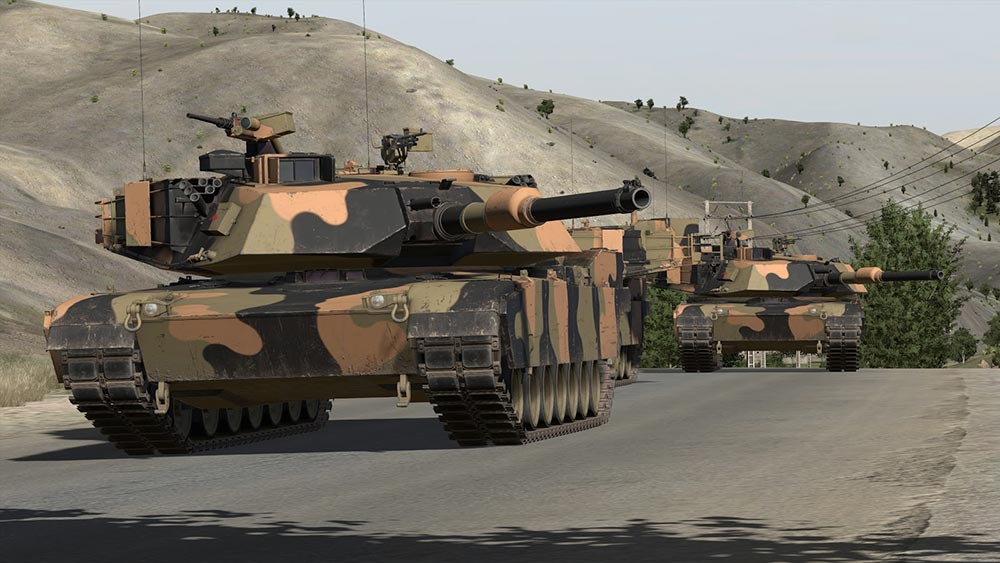 If you’re just thinking of starting out, a COTS-based, targeted fidelity solution can be delivered much sooner than a traditional simulator. There’s an interesting point, too, about upgrading: at BISim, we built a targeted fidelity simulator system for a major army ― it was of a version of an AFV that was not yet in service. So when the vehicles came, crews were highly prepared. (That’s the opposite of what sometimes happens - you get new equipment and then think how to train it.)

As COTS hardware (PCs, headsets) advances, and connectivity and cloud computing improves, COTS-based solutions will only get more realistic and more capable. In the coming decade, it is likely that these flexible, connected training systems will even play a part in live exercises to augment live forces in training scenarios.

I like abstract art. But if I’d only seen a Picasso Cubist apple, I’d wonder what a real apple looked like. So the ‘sketched’ targeted fidelity simulator picture, above, doesn’t really show what the trainee actually sees, and you don’t get to see how they are quickly immersed as if they are operating the real AFV. So this blog will wrap up by showing another trainee-view of targeted fidelity AFV simulation in VBS4, BISim’s newest and most powerful COTS military training software. 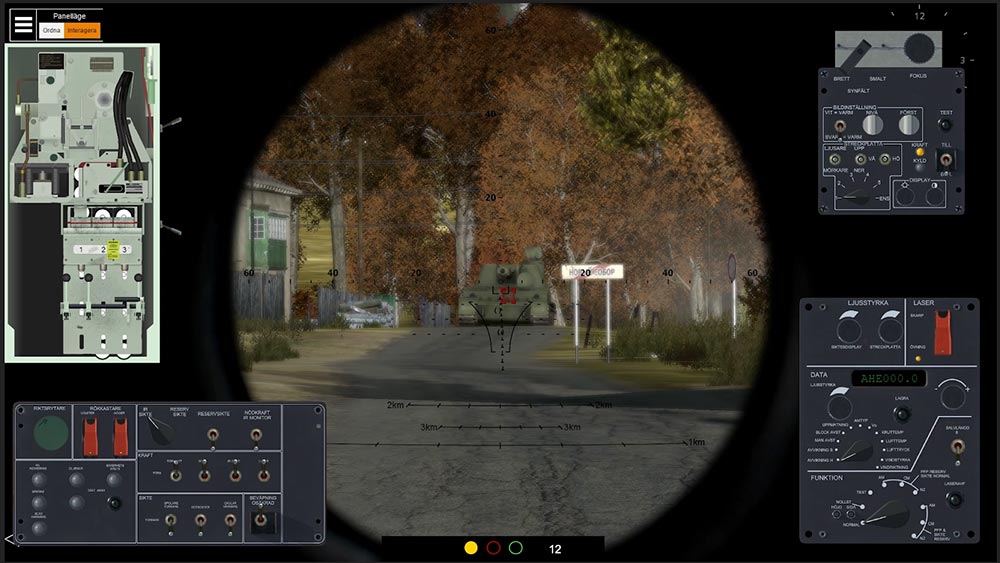 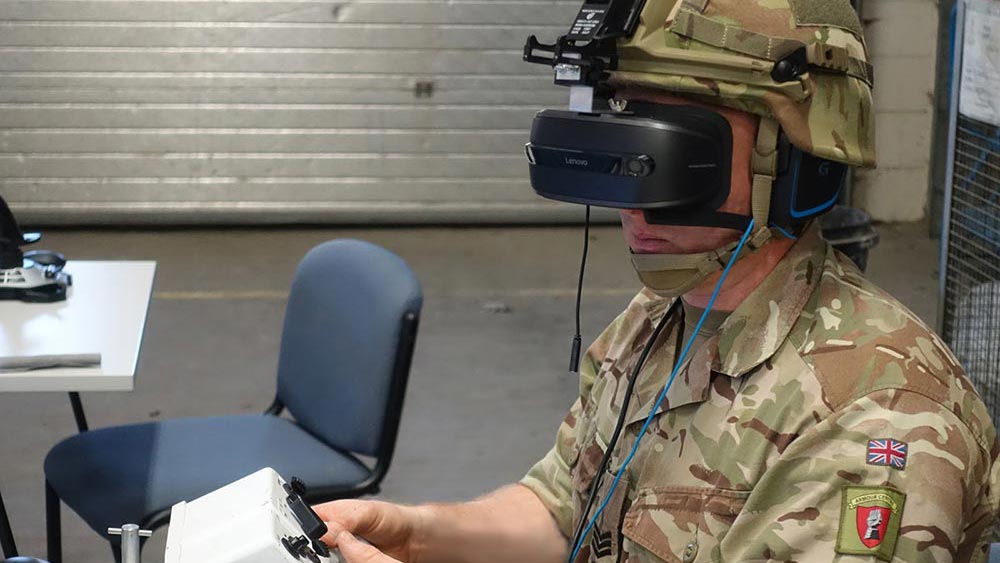 You can implement a targeted fidelity AFV system with VR.

BISim’s VBS is used for training by over half a million soldiers, sailors, airmen and marines around the world each year. VBS4 was designed from the ground up to make training easier, faster and global. (You can train as though you are anywhere in the world.) VBS4 has hundreds of military use cases, and it’s a very powerful tool for AFV training. (VBS4 also does a lot more besides. But those are for another occasion.)

For a comprehensive white paper on “A COTS Approach to Armored Fighting Vehicle Training,” or for a detailed demonstration, just contact sales@bisimulations.com.